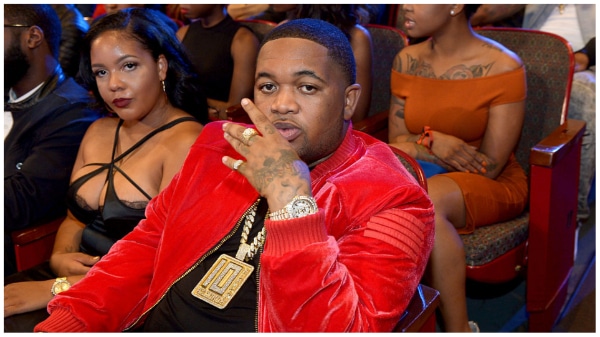 DJ Mustard (R) and Chanel at the BET Hip Hop Awards Show 2015 at the Atlanta Civic Center on October 9, 2015, in Atlanta, Georgia. (Photo by Paras Griffin/BET/Getty Images for BET Networks)

*DJ Mustard‘s ex-wife, Chanel Thierry, is reportedly seeking over $80,00 per month in child support as part of their ongoing divorce.

The Blast reports that in Chanel’s legal filing, “she is requesting an order by a California judge on issues of child custody, child support, spousal support, attorney’s fees, and even an order regarding their communication, or lack thereof,” the outlet writes.

Chanel wants joint physical and joint legal custody of their three minor children and noted in her legal docs that it has become “increasingly difficult to co-parent with Mustard as he does not communicate or answer her text messages.” Because of this, per The Blast, she wants “tie-breaking authority” when it comes to the “decisions regarding the health and education” of their kids.

.@mustard and @tydollasign might have a career in color commentary pic.twitter.com/fuEsuOxISP

Here’s more from The Blast report:

According to their Pre-Marital Agreement, Chanel shall receive $35,000 per month in spousal support and requests that Mustard “true up his support payments from June 1, 2022, to present. ” Chanel wants an additional $60,000 from Mustard to “true up the support payments he has made thus far.”

Per The Blast, in Chanel’s sworn declaration, she claims her ex “is a successful American Record Producer who makes an extraordinarily high living wage.” She says DJ Mustard’s net worth is about $12 million dollars so he has “more than enough income to pay for both his and my attorney fees.”

The former couple is reportedly due in court on February 1.