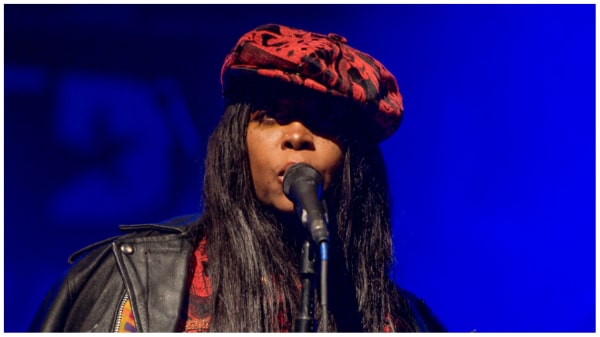 Puma Sabti Curry attends the “The DOC” premiere during the 2022 Tribeca Festival at Beacon Theatre on June 10, 2022, in New York City. (Photo by Michael Loccisano/Getty Images for Tribeca Festival )

*Erykah Badu and her 18-year-old daughter Puma Curry have rattled social media after posting their derrieres online to promote leggings.

For some odd reason, seeing a sexy Black mother and daughter posed together, fully clothed, but with their backside on display, has outraged the same folks who probably enjoy watching scantily clad women twerk. But I digress.

“I posted a pic (not my mom) of me and my mama Badu in some cute, form-fitting pants. I’m an adult. What’s the real issues? Let’s discuss,” Puma asked on Instagram.

Badu shared the same photo (see below) to her personal page along with the comment, “This the pic u posted got ’em uncomfortable,” she wrote. “Wait till y’all see our insides (heart, mind, spirit$).”

READ MORE: Erykah Badu Shows Love to Ye Amid His Battles with Gap and Adidas: ‘Thanks for Fighting for Us’

Badu and Puma reacted to comments such as, “What’s so jarring about Puma Curry posting that picture, is that it’s with her MOM! Posing like that with your PARENT, is weird,” someone tweeted, MadameNoire reports. “Had this picture been with a friend, or even by herself, nobody would give a damn.”

“See, this is exactly why I can’t enjoy Erykah Badu’s music anymore,” one tweet read. “Beautiful voice and loved her sound for years, but going from defending R. Kelly to telling girls to wear knee-length skirts to showing a mother-daughter-apple on Instagram just AIN’T IT.”

Some folks came to Puma and Badu’s defense, as one person commented: “Bernice Burgos and her daughter pose in wayyyy less clothing together on the regular and y’all b******* about Puma Curry and living legend Queen auntie Erykah Badu…”

Do you agree with the outrage over the mom/daughter leggings photo? Sound off in the comments.

The post Erykah Badu and Daughter Puma React to Outrage Over Their ‘Sexy Leggings’ Photo | LOOK! appeared first on EURweb.