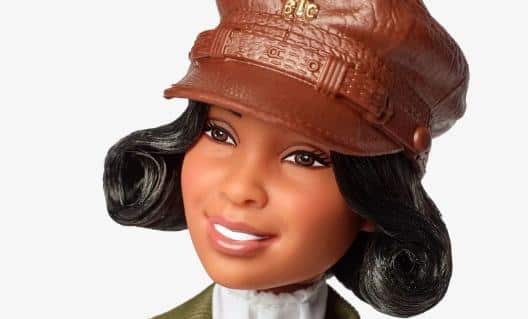 *Today, Barbie officially announced the launch of the Bessie Coleman Inspiring Women doll, recognizing the first Black and Native American female pilot with a doll made in her likeness, in advance of her birthday tomorrow, January 26, and in celebration of Black History Month.

To ensure Bessie’s legacy is truly represented, Barbie teamed up with Gigi Coleman, Bessie’s great-niece and President of The Bessie Coleman Aviation All-Stars, to celebrate this Inspiring Women Doll.

“As someone who has dedicated much of my life to encouraging the youth of all backgrounds to explore careers in aviation, my family and I commend Barbie for expanding my great aunt’s legacy in such an overwhelming tribute, with a Bessie Coleman Inspiring Women doll. Keeping Bessie’s legacy alive has always been a labor of love for my family, and we are proud to recognize her determination and accomplishments for Black women in aviation and continue to share my great aunt’s pioneering spirit with fans of all ages.

Coleman added: “We hope through this doll more people will discover Bessie’s story and be inspired. Stories have power, I grew up on anecdotes of my great-aunt’s courage and look forward to sharing them in my upcoming book.” says Gigi Coleman, Great Niece of Bessie Coleman, Author, and President of The Bessie Coleman Aviation All-Stars, committed to expanding opportunities in aviation for disadvantaged youth.

As part of the celebration of Bessie Coleman’s legacy, Barbie is also:  Partnering with Bessie Coleman Aviation All-Stars, a not-for-profit organization founded by Bessie’s great-niece, Gigi Coleman, that promotes the legacy of Bessie through STEM (science, technology, engineering, math) programming, educates students in the fundamentals of aeronautics, introduces students to various careers in aviation and explores historical and cultural aviation figures.

MORE NEWS ON EURWEB: Georgia Man Arrested After Son, 3, Accidentally Shoots Himself in the Head | Video

Partnering with Girls Write Now, a non-profit organization that has been breaking down barriers of gender, race, age and poverty to mentor the next generation of writers and leaders for the past 25 years. Through a Barbie Dream Gap Project donation, Barbie will help supply high school girls and gender-expansive young adults with writing and publishing programs and introduce role models to inspire the next generation of writers and leaders.

After a month of planning, Barbie is teaming up with American Airlines – the first commercial airline to hire a Black pilot – on a surprise and delight moment for passengers on a (one) flight operated by an all-Black female flight crew on January 26, 2023, Bessie’s birthday. This moment follows American Airlines’ Bessie Coleman Aviation All-Stars tour that took flight with an all-Black female crew in August 2022.

About The Inspiring Women Series: Barbie’s Inspiring Women Series pays tribute to incredible heroines of their time; courageous women who took risks, changed rules, and paved the way for generations of girls to dream bigger than ever before. Last year, the series paid tribute to Ida B. Wells, Dr. Jane Goodall, and Madam C.J. Walker for their crucial impact on civil rights, conservation, and female entrepreneurship, respectively. You can find additional information here.